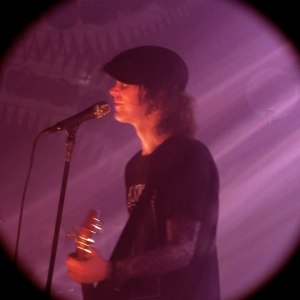 Fans gathered from all over to meet in Chicago for the much anticipated HIM show on March 12, 2014. The venue was filled with people dressed in HIM shirts and sporting heartagram tattoos. If you are a HIM fan, you know Ville Valo invented the heartagram as a symbol for the band when he was 20 years old. Not only is it a very meaningful symbol for HIM fans, it is also a popular symbol for tattoos and was used by Bam Margera for his skateboarding business and shows. You may know the symbol even if you don’t know the band or their music!!!

Due to an an illness last spring, lead singer Ville Valo, was forced to cancel their tour. Fans were worried about his health and were very happy to see the band return to the states this past summer on the Rock Allegience Tour with Volbeat.

The band Anathema from Liverpool opened for HIM.  Many of the fans appeared to be be unfamiliar with the band, but still seemed to enjoy their set and moved along with the music. They played songs such as “Fragile Dreams” and “Thin Air” and spoke about the new album that they would be putting out soon!

The crowd grew more and more excited as it came time for HIM to begin their performance. It was wonderful to see Ville Valo, Mige Paananen, Linde Lindstrom , Gas Karppinen, and Burton Puurtinen hit the stage . Their demeanor was easy going and relaxed. The band mixed new and old songs starting with the fast paced ” Buried Alive by Love” and then moving right into their biggest US hit, “Rip out the Wings of a Butterfly“. It was a big surprise for the audience when Valo began singing “ For You” .  This is an old song that has not been played live for a long time.

I, too, am a huge fan of HIM and it’s hard to not get emotional when the band sings fan favorites such as, “ Funeral of Hearts”, at the end of the show. I saw many tears flow!   It may have been because the show was near the end or because of the beautiful lyrics of the songs or maybe a little of both!

Valo and the boys closed the show with two more songs “Into the Night” from the new album, “Tears on Tape” and “When Love and Death Embrace”.

The entire venue was moving and singing with the music and clearly everyone was enjoying the show. Valo and the members of HIM have been performing for many years now and have and a strong connection with their fans. There is nothing quite like the experience of a HIM show. This was truly an amazing night of music at the historic Chicago House of Blues. Who could ask for anything better!!!

(Rip Out) The Wings of A Butterfly

Right Here In My Arms

Join Me In Death

When Love and Death Embrace