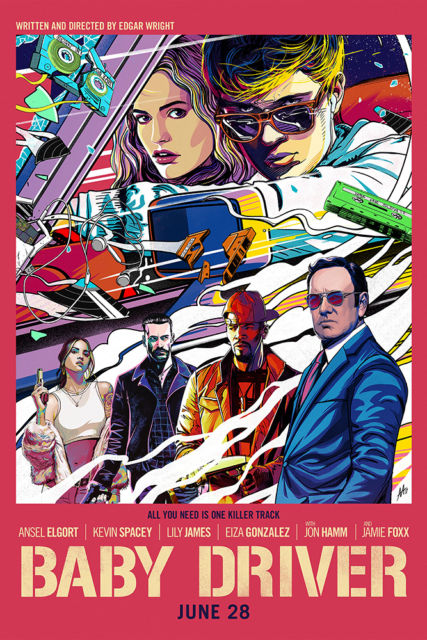 So, first things first- 4 stars, go see this movie. You will like it, I promise. I also think it benefits from the big screen and theater sound. So go spend your money on a non franchise, original film by a gifted film maker. Just go. Alright, on to the meat. So the basic story is pretty… well…. basic. We’ve actually all seen it before. It’s the story of a talented getaway driver (Baby) for a crime ring who wants to get out of the business and start a new life with his extremely homely girlfriend. And that’s the one flaw in this film. The story is very paint by numbers and unoriginal. The script is above average but nothing to write home about either….. you can tell that Simon Pegg and Nick Frost weren’t involved in the dialog writing here. I’m not sure if there’s another credited screen writer other than Wright himself, but this would be the area that I would say he definitely needs a strong parter. Don’t get me wrong, the script is good, just not great. There’s plenty of cleverness and laughs. It’s better than 75% of the scripts out there, just not up to the “Cornetto Trilogy” levels. BUT This film is not really about the story all that much, it’s about what’s on the screen. And what’s on the screen is a MASTER CLASS in movie making. Every frame is so rich. Every sequence has 2 sequences going on in the background. I could see this five more times and still not absorb everything. The driving scenes alone are worth the price of admission. This is “fast and furious ” for grown-ups. Whoever is driving those cars needs an Oscar. Make a new category or something… just give ’em the gold. And finally, the music. In this area, it’s almost an experimental film. For the most part, the entire score/soundtrack happens within the film. Meaning, the music is actually played by characters on a device in the film. So, to clarify, music in the film actually exists in real time in the film. The songs you hear are heard by the characters as well, as they are played by an iPod, turntable, car stereo, etc… no music happens in the film that aren’t played by the characters in the film. It’d be a gimmick if it wasn’t done so brilliant ly The songs run the spectrum from being a nice accompaniment to the on screen action, to commenting on it, to actually influencing Also keep an ear out for the sound mixing and design. Dialog, gunshots, car turns and, humdrum activities all follow the beat of the song that’s playing. If you notice it early, you’ll see it all the way through. It’s crazy cool, and must have been a nightmare to edit. Ok, bottom line: It’s a great film, go see it. It’s worth giving money to. Other than the hideousness of Lilly James, the film is visually and audibly stunning.

Cheers from the Slinkstitute Slink